To celebrate the season, please enjoy our Tomorrow’s Company Thought Hamper, a selection of the most interesting, exciting or thought provoking things we’ve been devouring this year. We hope you find something here to inspire you.

Merry Christmas and a Happy New Year from all of us at Tomorrow’s Company! Doughnut Economics provides one of the best critiques of current theories of our economy, and makes a powerful case for building a world where we live within our means. The doughnut is simple: “a foundation of well-being that no one should fall below, and an ecological ceiling of planetary pressure that we should not go beyond.” Between the two lies a safe and just space for all. By the time I finally read this in the Autumn, read this it had been recommended to me by several friends and read by half our team.

Where should we begin?, Esther Perel

I first came across Esther Perel many years ago when I was working in a bookshop and saw her book ‘Mating in Captivity’. It looked like the kind of pop-psychology I would usually avoid; all pastel covers and self-help words. Cut to 2018 and I am enraptured by her new podcast, ‘Where should we begin?”. In each episode we listen in on a couples therapy session; each couple facing a seemingly impossible impasse: one is an addict; they have stopped communicating; they are no longer intimate. It is wonderful to hear Perel work with them. She has an incredible skill for understanding people, and every time I am astonished at her ability to reframe a situation and to explain to an external audience in a way that somehow draws you in. She is warm, funny and fascinating, and the podcast is a delicate insight into human relationships.

From the refugee camps of Greece to the mountains of Macedonia, a thirteen year old boy is making his way to Germany and safety. Codenamed ‘Firefly’, he holds vital intelligence: unparalleled insight into a vicious ISIS terror cell, and details of their plans. But the terrorists are hot on his trail, determined he won’t live to pass on the information.This book was fast moving, gripping and highlighted the atrocities going on around the world.  I found it informative and it made me feel both angry and sad.

Cold War is a passionate love story between a man and a woman who meet in the ruins of post-war Poland. With vastly different backgrounds and temperaments, they are fatefully mismatched and yet condemned to each other. Set against the background of the Cold War in 1950s Poland, Berlin, Yugoslavia and Paris, the couple are separated by politics, character flaws and unfortunate twists of fate – an impossible love story in impossible times. I loved how this was shot in black & white, which created an amazing atmosphere about the struggles of these two young people in love and prevented for so long to be together.  It was so moving. 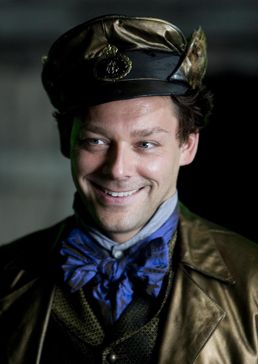 Hadestown is a tragedy – but a surprisingly hopeful one. Absolutely go and see it if you can – as of writing this there are still some tickets left, and the performance is fantastic; the live music on stage was one of the highlights for me. It’s a musical based on a concept album, and on the Greek myths of Hades, Persephone, Orpheus and Eurydice. That aside, though, the play is arguably about isolationism, economic inequality, human fallibility and hope; so it felt very relevant to our current political and social climate. Particularly because songs like Why We Build the Wall have a kind of literal application now that they didn’t quite have in the same way back in 2010 when it was written.

Going Postal is one of my favourite Pratchett books. It’s set in Ankh Morpork – the Discworld’s London – and follows Moist von Lipwig, convicted conman, now conscripted head of the Post Office. In a book that features gold suits, stiletto heels and a murderous banshee assassin (not to mention Bloody Stupid Johnson), it might be surprising to find commentary on consequentialism and competition law – but that is what’s there. Basically, as with most of Pratchett’s stuff, it manages to simultaneously make you properly laugh and think about serious issues like death, equality and cabbage flavoured stamps.

As a Development Studies student it is hard not to ask occasionally: Why am I doing this? Is there opportunity to create change and progress to society? Reading and listening to the news each day we hear regularly the problems, disasters and challenges we face, and ignore the progress that we have made. Rosling’s innovative use of data encouraged me to re-evaluate common (mis)conceptions about the world, and always to question the facts presented to us each day. Rosling’s positive outlook on the state of humanity is unusual, and provided me with relief and confidence in our work.

This book was a well-timed gift from my father towards the end of my undergraduate degree. Henry Fraser shares his inspirational outlook on life that helped him embrace his new way of living after a tragic accident left him paralysed at the age of seventeen. The book puts life (and my third year!) into perspective and is perhaps the most inspirational example of where defiance and resilience can get you. I frequently remind myself that if Fraser is able to believe that “everyday is a good day”, I should be able too as well! Finding Tara’s  book was an accident – we met on my commuter train from York to London. But what an accident. A Life Less Throwaway challenges our fundamental assumptions, our thinking about consumption in society. It questions a world in which satisfaction could be derived from simply having more things, to a world where each thing we have is a unique source of satisfaction in itself. It’s a move towards thinking about quality of life. Its implications, however, are far wider than our shopping habits. It’s an idea that has the potential to disrupt how we think about retailing, manufacturing, distributing. In fact all of the fundamental precepts on which today’s business models are based.

‘Jordan Peterson, censorship and the left’ with Tim Lott

Much has been written by and about Jordan Peterson this year, and there are thousands of hours of Peterson’s lectures and interviews available on YouTube. What stood out for me was this interview with the journalist and author Tim Lott, who was the first person to publish a profile of Peterson in a mainstream UK publication. In it, Lott attempts to get to grips with Peterson’s appeal. A self-confessed ‘old lefty’ writer and Guardian journalist, Lott first became aware of Peterson through the latter’s work explaining the power of stories and myths. “If I can crack the problem of what makes for a compelling story, it’s going to make me a better novelist,” Lott explains. The search for a compelling story is ultimately the search for meaning, which is – as Peterson says endlessly – far more profound than the search for happiness. In other words, a lot of people live very nice lives, but they are not necessarily very deep lives.